abide: To remain stable or fixed in some state or condition; to continue; to remain.


It's August 2010. You're facing a string of indefinite Sunday nights. You drive past the Lanes marquee: Fall Leagues Now Forming. New IronMan Pinball.


It all swirls in your mind: memories of bygone crashing pins and foamy beers. Keno at the bar in 1997. The fact that a friend sent you "Let's Go Bowling" as a "song of the day". Your amusement at The Big Lebowski. You decide to BOWL.


You find yourself calling to ask how to form a team. How many members do you need? How many subs can you have. (You know you won't be able...willing?...to bowl EVERY Sunday from now to May 2011). You poll all able-bodies associates. Who likes to bowl? Who maybe likes to bowl? Who doesn't give a shit about bowling but is willing to leave the known behind and enter League Land for 3 hours once a week? Far-reaching pleas are issued on Facebook and at casual coffee shop encounters to RECRUIT.


You find yourself with an unlikely cohort of filmmakers, homemakers, thinkers, drinkers, smokers, jokers, and midnight tokers willing to roll the big balls.


You realize you have no idea what this all really means: voting in a league-wide ratification of rules you don't understand; a weeks long hunt for bowling shoes (maroon with green and gold accents and white rubber soles--DON'T WEAR ON THE STREET!); Internet searches for bowling techniques and ball-selection tips; familiarization with phrases such as "That lane bites" and "Pick that shit up"; a membership to the U.S. Bowling Congress (membership card now residing in wallet);  a bank account-draining, cash-only $21/week pony for the "pleasure ?" of barely breaking 100 and solidifying your spot as the team's "anchor woman"; an existential crisis around whether you should have committed to such a long, long season; a muscle strain that screams how pathetically weak you really are and puts you off the team for a relieving but at the same time frustrating 2 months; a compelling desire to show up on league night anyway and drink copious amounts of beer (warning sign, anyone?); STRATEGY.


Weeks go by, and you find yourself heckling your teammates into bowling better because you NEED to be in the top 2 teams in the league. Hey...it's $1500 championship money on the line, OK!!??!! Emails fly with thoughts on who should bowl, when, why, who should sub, why and why not. Team members find themselves psyching themselves up in the men's room between frames. You feign shock and laugh about it, but secretly you hope it fucking works to increase the score.


Oh my god, WTF?!? You find yourself wondering...Am I competitive? ABOUT BOWLING?!?


You can't believe it's true. This was just for fun! Forget the bowling. Let's Party. You issue an invitation to your house to just be with your bowling team and celebrate the League half-season with a potluck dinner and a nice chill evening. 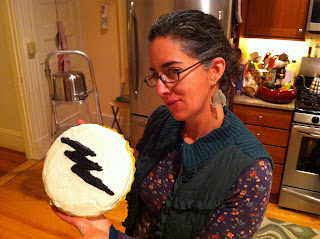 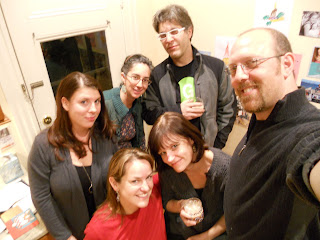 White Russians are flowing. You put on the Big Lebowski. Suddenly, you don't just love the movie...you IDENTIFY with it! Walter won't miss league night, even if there's a toe on the line. Jesus is resplendent in his purple pantsuit with matching socks and shoes (you WANT to be able to pull that off next Sunday). 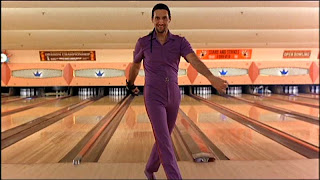 The Dude is your hero.
You wake up the next morning with a hammer in your head and a pounding in your heart, and despite the nausea and the vertigo (or maybe because of it), you know: Yes, I am a League Bowler.
Second half of the season starts Jan 2. Forget the top 2, there's only one winner. LET'S GO THIRD RAIL BOWLING CLUB!!!!!!!! WOOOOHOOOO!!!!!!!!
Posted by Third Rail Bowling Club at 2:18 PM